After publishing the uniquely provocative exploration of unconventional sexuality The Governesses in 2019, Les Fugitives return with another collaboration between Anne Serre and Mark Hutchinson: The Fool and Other Moral Tales. The Fool in question is from a tarot pack, and this was my stumbling block: I have no knowledge of or interest in tarot, and I felt rather lost in the first two stories. In fact I felt a little ignorant: I was able to appreciate how stylistically accomplished both the tales and the translation are, but beyond that I didn’t find any connection. In a bizarre twist, this turned around completely in the final tale, “The Wishing Table”, which was the one I thought I’d struggle with the most (“The Wishing Table” is narrated by a woman who grew up in an incestuous family, and it’s safe to say this is not a premise I found particularly appealing – but read on, because that’s what I did, and it was worth it!) 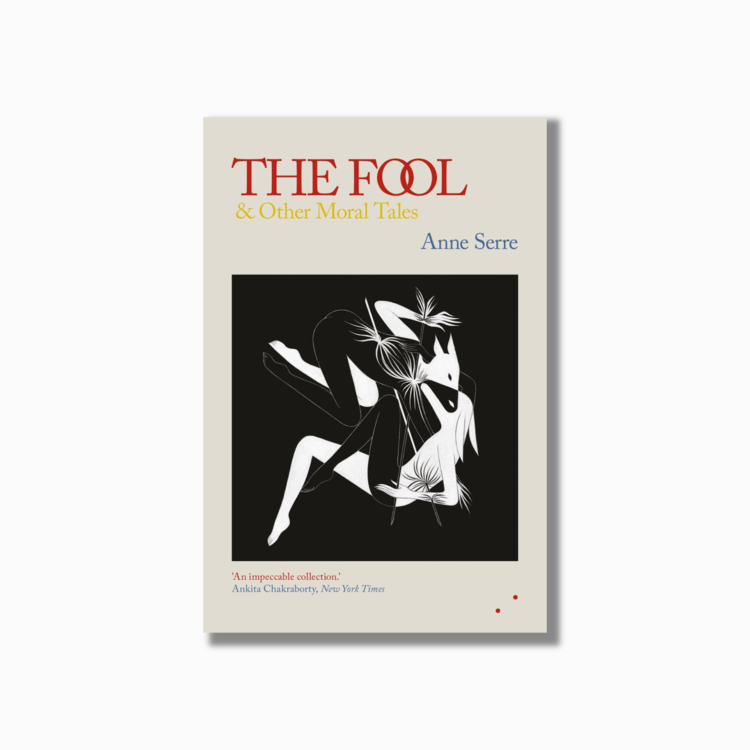 “The Wishing Table” is the longest story in the collection and when, near the start, I read the section that followed the announcement “They did things to us that it’s absolutely forbidden to do with children”, I did wonder whether I would make it to the end. There’s nothing comfortable about this story, but that’s where its brilliance lies. If I found the first two stories a little hard to follow, I think it’s because they’re deliberately destabilising, entwining the mundane and the magical, the philosophical and the fantastical: in the end I realised that this destabilising, shifting quality is precisely intended to reflect the shifting of the tarot cards, changing fates and paths as they are revealed and obscured. I didn’t revisit these first two stories in light of the third, but I do think that “The Wishing Table” is the one that really makes this collection.

The daughters are certainly not presented as victims: they are fascinated with their parents’ sexual bodies and the pleasure that can be gained from them (usually as willing recipients of sexual acts, occasionally as instigators). Nor are the parents depicted as immoral or sadistic: the narrator says of her mother that “As I’m sure you’ve understood, the idea that anything untoward was going on in her house had simply never occurred to her. She thought that this was what life was like.” A series of minor characters also join in the family’s “love feasts” (whether on solo visits or partaking in orgies), including a man the narrator repeatedly cavorts with in his car. There is something quite dark and disturbing about the parents sending their daughters off in the cars of men they barely know, but Serre disrupts any conventional reading of this by detailing the pleasure the narrator takes in the sexual acts in which she and her family engage. Indeed, her voracity for sexual pleasure is mirrored by her voracity for reading, connecting the two in ways that are harmonious with the collection’s focus on the union of the carnal and the cerebral.

“The Wishing Table” is full of polished surfaces: the large mirror in the hallway where Maman contemplates herself for hours, and especially the vast dining room table on which much of the incestuous activity occurs. This surface is the anchor that keeps the narrator sane while the other members of the family lose their minds, but it is also the surface that, years later, cracks and leaves her feeling “as if that table, instead of being a thing of joy and of frenzied, passionate delight, had been a sacrificial altar, as if I’d been amputated there, tortured and dismembered, but back then had somehow dreamed my way through it all.” This realisation is prompted by the movement towards a more orthodox relationship, yet Serre refrains from making pronouncements on the narrator’s psychological development.

The story unfolds in a compelling way, drawing us into the family’s unorthodox homelife and then describing how it all disintegrated, small shifts preventing the individual members from sinking single-mindedly into the “wishing table”. The darkly fairytale scenario then twists to a more recognisable coming-of-age story, but the movement between places is always vaguely magical or dreamlike, recalling again the shifting of the cards. After the enchanted state of childhood, the early adulthood is much more grounded in a world outside the family home, the latter becoming locked in the bois dormant of the narrator’s memory (and which her sister locks away even more deliberately, as the narrator discovers when the two women meet later and try to salvage some kind of relationship with one another).

Hutchinson’s translation is full of lexical gems, and the style, which is at times deliberately arcane (and always shamelessly literary) is very reminiscent of The Governesses – the French original is (to my mind, at least) almost visible beneath the text in the register and syntax, but in a way that offers the stories as simultaneously very rooted in their source yet entirely portable. There is the occasional reference that you’d have to know French language or literature to fully appreciate, but not “getting” these references wouldn’t mar appreciation of the stories. Hutchinson and Serre worked closely together to bring this collection of “moral tales” (published separately in French) into one volume in the English translation. The result of their collaboration is a stylistically accomplished and thematically explosive collection of stories that are at once contemporary and timeless.