Translated from German by Abigail Wender (The Bureau of Past Management) and Katy Derbyshire (Madgermanes), V&Q Books, 2021

The autumn V&Q offering includes two excellent books by women, one that deals with inherited guilt from the Nazi era and the other that explores the fate of Mozambican workers who emigrated to Germany in the late 1970s, then after the Berlin Wall fell lost both their residency status and the wages they had been promised. 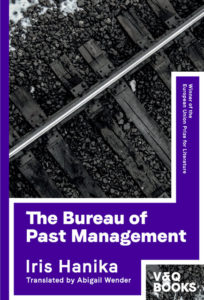 I started with the fabulously-titled The Bureau of Past Management: its main character, Hans Frambach, works at the (fictitious) Bureau of Past Management in Berlin. Here he archives the testimonies of Holocaust survivors, working “day-in and day-out in the vineyards of memory.” Obsessed with the crimes perpetrated in the Nazi era, crimes described as so large they will continue to haunt the seventh generation, his overwhelming feeling that he has to undertake acts of remembrance serves to remind us that the past has not slid away or loosened its grip on contemporary Germany. The work of the Bureau seeks to understand the nation’s history, and in so doing come to terms with it and “forge a path for the future”, yet the impossibility of this reconciliation is apparent throughout. Hans is relentlessly miserable, and comfortable remaining in that state; his resignation and self-recrimination mirror the inability of the country to move forward, as evidenced in this particularly eloquent section:

The state remembered its duty and resolved to take this burden away from its citizens; it would undertake to memorialise the crime as its eternal duty. It would cast the burden into historical monuments to fulfil the obligation and, as years went by, the number of monuments increased, and yet the crime did not diminish – it could not be left behind.

The tone of this passage is indicative of the book as a whole – it deals with tremendous historical guilt and atrocity with depth and perspicacity, but maintains an ironic detachment that does not idealise over-insistence on remembrance (this is particularly evident when Hans visits a large bookstore and in the “German History” section finds ten books on Nazi history, one on Hitler, and one on Hitler and Stalin, noting that “Other German histories were not to be found”).

The only relief Hans finds is through his friendship with Graziela, who he thought shared his feelings of guilt and perpetual melancholy, but lately has embarked on a relationship that is starting to lift her out of the gloom. Eventually she accuses him of becoming hostile and self-involved, and the impossibility of living under the weight of historical guilt is laid bare through the way in which Hans manages his life: “Loneliness had eaten at him for so long, maybe now it was devouring him.” Such deft turns of phrase are rendered in Abigail Wender’s translation with intelligence and agility, and I particularly appreciated Wender’s use of verbs throughout, with notable examples such as “you couldn’t chug into the future with these words”, “a chasm where memories throng” and “he thudded back to misery, as if it were the only place for him.”

The Bureau of Past Management is profound but never pretentious: Hanika resolutely refuses to offer a sermon on the failures of Germany’s “past management”, but does suggest a way forward that confronts the past instead of archiving or displaying it: “Contemplate, rather than commemorate.” 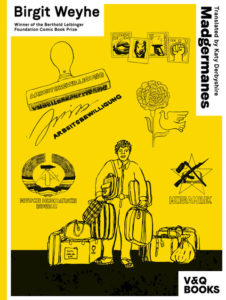 Excellent as The Bureau of Past Management is, for me Madgermanes was the outlier that caught me by surprise. The Madgermanes of the title are Mozambican workers once contracted out to East Germany; Birgit Weyhe conducted extensive interviews with some of these workers, and from their stories created three fictional narrators whose stories are told in the form of a graphic novel.

We learn that the Madgermanes were sent to East Germany as an agreement between the two socialist states; their hopes of becoming skilled workers – teachers, engineers, doctors, architects, mechanics – were crushed by the reality of the low-paid and often unpleasant jobs that awaited them in Germany. On top of this, a significant portion of their wages was held back, with the promise that it would be waiting from them on their return to Mozambique. After the fall of the Berlin Wall, almost all of the Madgermanes lost their residency status and had to return to a place that no longer felt like home, only to find that their wages had disappeared into the ether; to this day they are still waiting to be paid.

Based on the testimonies of the Madgermanes she interviewed, Weyhe creates three characters whose stories intertwine: José, Basilio and Annabella. Each of them in turn revisits the same period of their shared past, their paths and emotions tangled but their futures devastatingly separate. José wants to work hard and secure a future for himself, while his roommate Basilio wants to make the most of the bars, music and women in East Berlin. José meets and falls in love with Annabella, and they begin to make a happy life for themselves, despite tragedies back in their homeland that they only learn about when they are long past. José and Annabella dream of carving out a more hopeful future for themselves and their families, but are torn apart by a betrayal forced upon them by the terms of their contracts and their lack of power over their own lives.

The cultural clashes and complexities are dealt with simply, but their simplicity does not veer towards cliché. The use of a graphic novel does not allow room for extensive reflection in the text, and so simple phrases combined with the deeply affecting artwork convey an immensity of emotion and context. Katy Derbyshire’s translation is luminous: the restrictions of the genre must have made this a difficult task, and yet the personality of each narrator, the intensity of emotion and experience, and the comment on the two states between which the Madgermanes are trapped are communicated with a dexterity that is truly remarkable.

Madgermanes offers a unique perspective into a group of people forgotten by every place they have called home, and let down by every institution that promised them a better life. It has much to teach those of us who, like me, knew nothing of the Madgermanes before now, and yet its themes of displacement, loss, hypocrisy and disenfranchisement are universal. As I write this, I find it hard to express just how moving this work is; everything I want to say seems inadequate if not accompanied by the text and illustrations in the book itself. I can only hope that you seek it out for yourself, and enjoy it as much as I did.