Translated from the French by Alison L. Strayer (Fitzcarraldo, 2018)

The opening line of Annie Ernaux’s The Years, “All the images will disappear”, both sets up and sums up her project: every memory of every life – from historical atrocity to TV adverts – will vanish at death, and so we must remember, bear witness, and claim a place in the world. This ambitious and innovative autobiographical endeavour is a modern masterpiece, and I was delighted when Fitzcarraldo sent me a copy for review. Publisher Jacques Testard describes The Years as “a monumental account of twentieth-century French social history as refracted through the life of one woman”, and this is about as accurate a statement as anyone could come up with to describe The Years. It’s a tremendous, poignant, necessary book, but there’s a big issue for the translation: how will something so steeped in French cultural history translate to another context, and into another language?

Firstly, although you don’t need to have read any Ernaux to enjoy this book, any reader who has read other texts based on Ernaux’s life will recognise a number of important references in here: her mother’s illness and decline, her reflections on growing up in a post-war working class milieu, her relationships (including her first sexual relationship, an adult affair, and an illegal abortion) and her use of photographs to frame a narrative all feature in other works by Ernaux, and are presented in a different way here. In fact, “presented in a different way” could sum up everything about this book: it challenges perceptions of autobiography, balances personal triumphs and quiet tragedies with historical atrocities and the implacable passing of time, and offers a fascinating overview of life in France from the 1940s to the 2000s. 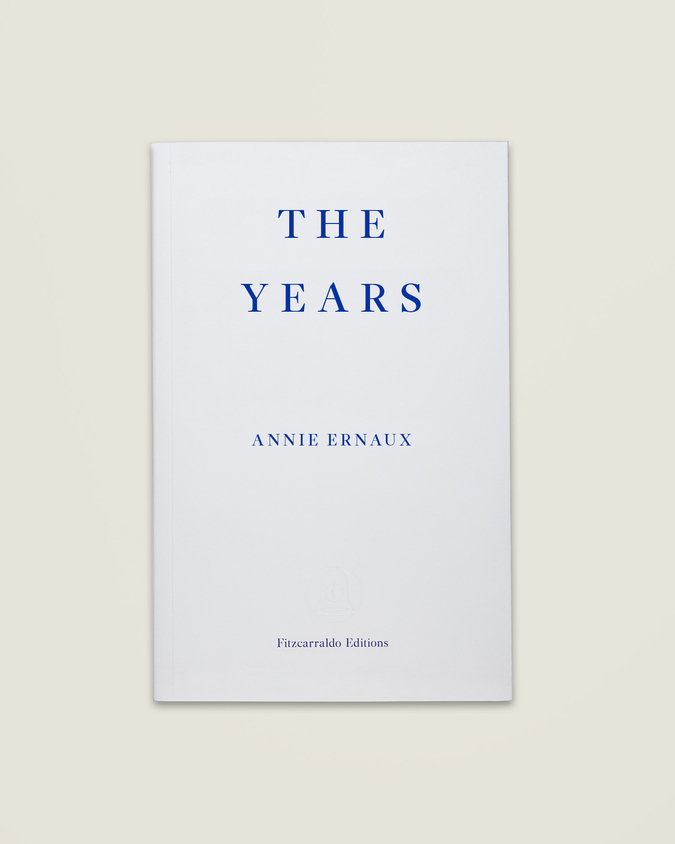 Testard advertises The Years as a “collective autobiography”, but there is more to be said on this. In one sense it is not collective, since it is written and narrated by only one person, but it is certainly not a “traditional” memoir. Rather, it is an individual voice representing a collective one: Ernaux herself describes it as an “impersonal autobiography,” based on a collection of images and reflections, a narrative framed around photographs of the author at different points throughout her life. The girl and woman in the photographs is never explicitly named as Ernaux, but the series of photos provide the reference points through which her past – and that of her country – is narrated. The “collective” aspect is evidenced in the most striking feature of this sort-of-autobiography: Ernaux never uses the first person singular. She does not speak as “I”, but rather “we”, or occasionally “one.” This narrative style mirrors Ernaux’s own description of the way her relatives told stories of World War II: “everything was told in the ‘we’ voice and with impersonal pronouns, as if everyone were equally affected by events.” Adopting the same narrative strategy elevates this from a personal memoir, and instead makes it about events that affected people of Ernaux’s generation: in this way, The Years becomes an artefact for the collective memory of a generation. In the translation, the pronoun most regularly used is “we”, which creates an inclusivity akin to that of the French impersonal pronoun “on”, but on the few occasions when Strayer uses “one” in the English translation, it stood out as a little jarring to me (“It was quite enough that you had to be afraid of making love, now that everyone knew AIDS was not only a disease for homosexuals and drug addicts, contrary to what one had first believed”; “Just getting tested was suspect, an avowal of unspeakable misconduct. One had it done at the hospital, secretly, with a number, avoiding eye contact in the waiting room.”) I can see why Strayer chose the impersonal “one” here, as using “we” in the first instance implies that she and her peers initially believed AIDS to be a disease for homosexuals and drug addicts, and in the second instance would confirm that she and her peers went to the hospital for AIDS tests. I imagine that the sudden shift to “one” was a decision not made lightly, but can’t help thinking that something truly impersonal (the non-specific mass noun “people”, for example, or a passive, if we accept a shift in agency), might have stuck out a little less here – especially in the first instance, when the subject shifts from “you” to “everyone” to “one”.

Where the impersonal pronouns do work well, and map neatly onto the French original, is in Ernaux’s description of herself via photographs in the third person singular, “she.” The woman in the photographs hopes to write about “an existence that is singular but also merged with the movements of a generation,” and this is the great strength of The Years: its universality. Anyone who lived through the events Ernaux describes – even if not as closely as those who lived in France – will be able to relate to the global political shifts of the last sixty years (“1968 was the first year of the world”) and the technological advances of the 21st century (“a world that moves ahead in leaps and bounds”). Nonetheless, Ernaux eschews self-congratulation for her enterprise, noting with irony that “in the humdrum routine of personal existence, History did not matter. We were simply happy or unhappy, depending on the day.” This daily life is in part deliberately banal, in part coloured by history, but always recognisable and always beautifully observed. The Years is nostalgic yet still contemporary, from the pronouncement that progress means buying more to the description of fearing Arabs on the street during the Algerian war.

Women’s history is, unsurprisingly, at the forefront of many of the historical narratives: from equal access to education and “the deadly time ruled by their blood” that preceded the legalisation of contraception to the facilitating of backstreet abortions being likened to the Resistance of World War 2 and the revolution of May ’68, Ernaux brings to life a specifically female experience of “the years”. These are underlined by a gritty realism, however, as May ’68 is described as neither as momentous nor as glorious as the recurrent camera images, and Ernaux notes that “the struggle of women sank into oblivion. It was the only struggle that had not been officially revived in collective memory.” The Years helps to combat this, reviving the struggle of women in a conscious contribution to collective memory, and an attempt to allow a generation to own its collective history.

“Just as her older relatives used to gather around the family table to eat and to share memories that became their version of history, now it is Ernaux’s turn – and with her, her generation – to ‘tell the story of the time-before.’”

The Years is a book that defies translation: how can we translate a novel that is like a memory box of post-war French culture? Yet we have to try, and that Strayer has produced a page-turning, non-alienating piece of literature is a remarkable feat. There are some minor inconsistencies in the translation, though. For example, song and book titles are sometimes given in French with no footnote, sometimes given in French with a translation in the footnote, and sometimes given in translation. It must have been quite an endeavour for the translator to decide which would be recognisable more universally, and which would not. Radio and television shows are dealt with in the same way: Les Guignols de l’Info is given a footnote, but Allô Macha is not. The quintessentially French “minitel” (a pre-internet information system) is left as “the minitel”, and one footnote makes reference to “an untranslatable fart joke.” Strayer’s approach mostly seems to correspond to Michael Hoffman’s position that “what matters to me[…] is providing an experience, not footnoting one that might have been in had in another language, if only the reader had been conversant in that” – she provides an experience with minimal footnoting, recognising that it will not be the same and that endless footnotes would not make it any more comparable to the original. Though there is the occasional inconsistency or turn of phrase that gave me pause for thought, these are small details in an otherwise beautiful manuscript, that takes Ernaux’s masterpiece and offers it as an experience to a new readership.

As a true meta-narrative, the book ends with the woman in the photographs deciding to write down her story, which will be “a slippery narrative composed in an unremitting continuous tense, absolute, devouring the present as it goes, all the way to the final image of a life.” To cover more than half a century in such incisive detail, in under 250 pages, is an achievement in itself: the passing of time is palpable throughout, but the narrative never feels rushed. Rather, this is a handing-down of an obligation to remember. Just as her older relatives used to gather around the family table to eat and to share memories that became their version of history, now it is Ernaux’s turn – and with her, her generation – to “tell the story of the time-before”; translating this important work into English contributes to this imperative to remember.

The Years ends as it began, with snapshots from images that will disappear (at the beginning) to memories she wants to save (at the end). It is, perhaps, no coincidence that she talks of “saving” things in the digital age, and this is one of the great achievements of The Years: it saves a common time, a collective memory, and “the lived dimension of History.” 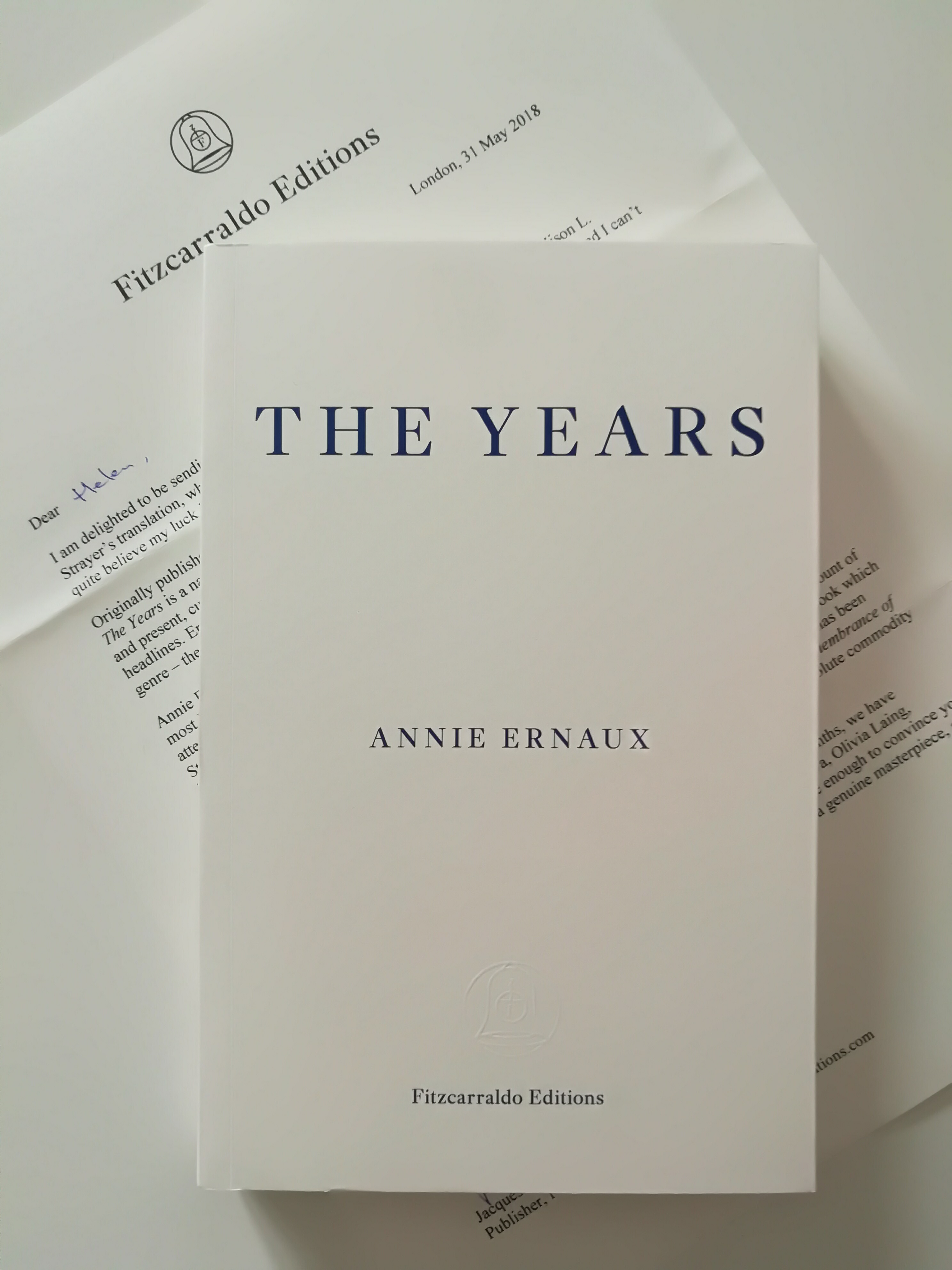