A Beast in Paradise is the English-language debut of Cécile Coulon, and deals with the tragedy and determination of a farming family in rural France. The opening is a scene of bucolic tranquillity: “On either side of the narrow road snaking through rich green field, the green of storms and of gras, flowers – enormous, pale-hued, fragile-stemmed flowers – bloom all year round. They run alongside this ribbon of asphalt until it joins up with a path marked by a wooden stake, capped by a sign reading:

YOU HAVE REACHED PARADISE”

We are invited into Paradise, a sprawling farm whose topography is mapped out for us in the first two pages, until we encounter an elderly lady with a long memory standing in the empty pigpen. The idyll is broken in the final line of this first chapter, in a style that will come to be recognisable as one of the contrasts that characterise Coulon’s storytelling: “one beast comes here each morning, to mourn.
Blanche.”

Then a flashback begins, first to a key episode in Blanche’s adolescence and then to her childhood. Presiding over Paradise is Blanche’s grandmother Émilienne, whose dedication to the farm and its occupants – both human and animal – holds the family together and gives them a purpose: in Paradise, “everything began and ended with her.” When her daughter and son-in-law are killed in a car accident on the perilous hairpin bend leading to the farm, Émilienne is left to raise their infant children Blanche and Gabriel. Her own devastation is rarely mentioned: Émilienne is a woman who raises herself up and marches on. 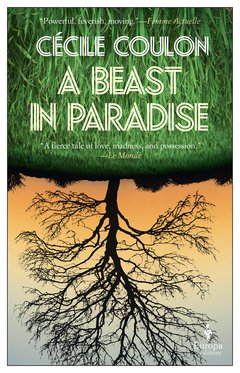 In addition to her grandchildren, Émilienne takes in a young man named Louis who starts to work on the farm after the death of Blanche’s parents. Louis is systematically beaten by his father and one evening flees to Paradise in search of a refuge that he assumed would be only temporary, but which Émilienne calmly makes permanent. Louis becomes her trusted farmhand, as devoted to Paradise as Émilienne is. Paradise is a haven, but also a succubus, a place that lives inside its inhabitants as much as they dwell within it: Émilienne is part of the herd; Louis’ greatest connection to Blanche is their shared attachment to Paradise, “consuming, voracious, untameable”; even Gabriel, the only one who eventually summons up the strength to leave, is cursed with a black tree that had “taken root inside him in early childhood, a tree watered with fury by his parents’ deaths.”

Headstrong Blanche and sickly Gabriel are marked out as different because of their family tragedy, and have few friends at school. Though Gabriel has an interesting story arc in his own right, the focus is on Blanche: this is a girl who circumstances have “turned into a warrior at five years old.” As the children stumble into adolescence, Blanche’s proximity awakens feelings in Louis that she recognises but can never reciprocate – she only has eyes for Alexandre, the golden boy of the class. This is the love story that will raise Blanche up and then knock her down, and which forms the majority of the novel’s intrigue. Alexandre is wholly undeserving of Blanche, an unremarkable man with “big ideas, big dreams and little words” who has erected around himself a hubris of brilliance that fools everyone but Louis. Yet Louis, whose feelings for Blanche are widely known, is assumed to be simply jealous of Alexandre, and all his warnings go unheeded.

The great strength of the narrative is the way in which it builds up the tension towards the dénouement: in reality, years pass with very little happening, yet there is something compulsive about the awareness that something dramatic is looming. The balance between bucolic idyll and emotional and physical ferocity is also a key feature, and one that is particularly well rendered in Kover’s translation. Deep emotions burst out of careful restraint, and in these moments the expression is exquisite (“Her body remained upright through pure reflex, but inside, her whole soul, the soul made up of all the ages she had been, all the experiences she had had, caved in”). Indeed, the entire novel is sensitively translated, particularly the shifts in tone but also the smaller details of vocabulary: the path to Paradise is “pocked with brown puddles”, tiny insects go “skittering” up Blanche’s arms, one character “soils another with shame.”

The feature I most enjoyed about A Beast in Paradise, however, was the question over who the beast is – and what we understand by “beast”. The word appears in various contexts, and the perspectives on monstrosity are extremely clever: I got entirely the wrong idea about who was going to do what to whom, and so as the events developed I found myself spellbound by a story I hadn’t anticipated at all. Most of all, each time I put this book down I really looked forward to getting back to it. A Beast in Paradise is one of those books that reminds you that you don’t have to “relate” to characters – they can be completely different from you, and still draw you in. In particular, the build-up to the final revelation is outstanding, and after I’d finished reading I was left thinking about it for days. This is a story of ordinary lives and extraordinary pain, and a superb English-language debut.