August has come and gone, and with it another Women in Translation month. Instigated by Meytal Radzinski in 2014 to encourage more people to read women’s writing in translation, Women in Translation month has grown in both reach and momentum each year (and now has a brand new website!) I always enjoy looking through the #WiTMonth hashtag on social media, but this year I participated much less actively (or perhaps I should say much less visibly) as I haven’t had time to record publicly the things I’ve been reading. So here I am well into September, writing (a little belatedly, a little shamefacedly) about what I read in August… 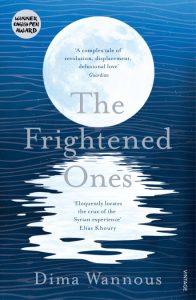 At the start of August I was reading The Frightened Ones by Syrian author Dima Wannous, translated from Arabic by Elisabeth Jaquette. This was sent to me by Harvill Secker over 18 months ago, and I had intended to read it in August *last year*. For an entirely inexplicable reason (possibly the guilt of leaving it languishing on my shelf for so long?) I wasn’t particularly expecting to enjoy this book, but I was very wrong indeed. The Frightened Ones is a carnal, horrifying account of hunting love and fleeing fear as conflict rages in Damascus: Suleima meets a mysterious writer in her therapist’s waiting room, and they fall into an intense yet brittle affair. The writer, Naseem, later sends Suleima a copy of his manuscript, narrated by a woman whose life is disturbingly similar to Suleima’s own. The narrative switches between Suleima and the narrator of Naseem’s book, until both stories collapse into one another and Suleima can barely tell the difference between the two. The Frightened Ones is experimental in form but grounded in a horrifying reality in which “one aching version of humankind” lives, dies and endures. 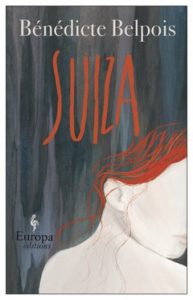 My next book was Suiza by Belgian debut writer Bénédicte Belpois, translated from French by Alison Anderson (Europa Editions). The narrative perspective is that of Tomás, a terminally ill and rather unreconstructed (okay, misogynist) Galician man, who “rescues” illiterate waitress Suiza from her abusive employer by punching said employer and dragging Suiza off with him. After some pretty aggressive sex, Tomás takes Suiza home and “keeps” her. The two do fall in love, and Tomás does come to realise that their relationship shouldn’t be about ownership, but nonetheless it was a bit disappointing to read so much of Suiza’s story from his perspective. When Suiza herself does speak, there are hints of a backstory that I would have loved to see developed further, and in particular I would have liked to understand why Suiza was so happy to renounce her agency and rely entirely on Tomás and his (questionably motivated) benevolence. While there is plenty to enjoy in the story itself, which is very immersive and kept me wanting to read on to find out what would happen next, the ending slipped back into the power dynamic that I found frustrating; I think I’d have clicked better with Suiza if it had been Suiza herself narrating. 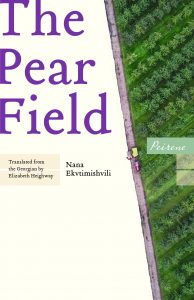 My main holiday read was The Pear Tree by Nana Ekvtimishvili, translated by Elizabeth Heighway (Peirene Press). This is only the second novel I’ve read from Georgia (the first was The Eighth Life, which long-term readers might remember I loved deeply), and if these two are representative of contemporary Georgian literature then I don’t know why we’re not seeing more of it. Lela has been raised in a “school for idiots” on the outskirts of Tbilisi, and has survived systematic abuse by one of the teachers by channelling her energy into planning her revenge. Now old enough to leave the school but offered a job there as warden, Lela takes under her wing some of the more defenceless children so that they do not have to endure the same experiences she did. When an American couple want to adopt a Georgian orphan, she sees the opportunity to give abandoned boy Irakli a new life, and so two tense and intertwined narratives develop together as Lela and Irakli edge closer to their respective futures and freedoms.

And to bring August to a close (this is going to be a bit of a teaser as to what you can expect in my next couple of reviews) I had a Parisian double whammy with Lauren Elkin’s Notes on a Parisian Commute (released by Les Fugitives this week) and Ketty Rouf’s No Touching (translated by Tina Kover and coming soon from Europa Editions) – I’ll be back talk to you about those soon!