2020 looks set to be an exciting year for women in translation: if, like me, you’re thinking about what your reading year will hold in terms of new releases, here are 20 books to look forward to this year by women from around the world. From dystopian alternate realities and speculative fiction to a feminist retelling of ghost stories and wickedly wry reflections on modern life, this is an eclectic and exhilarating mix of personal and political literature that includes novels, short stories, fiction, memoir, autofiction and speculative fiction. Dive in and enjoy! 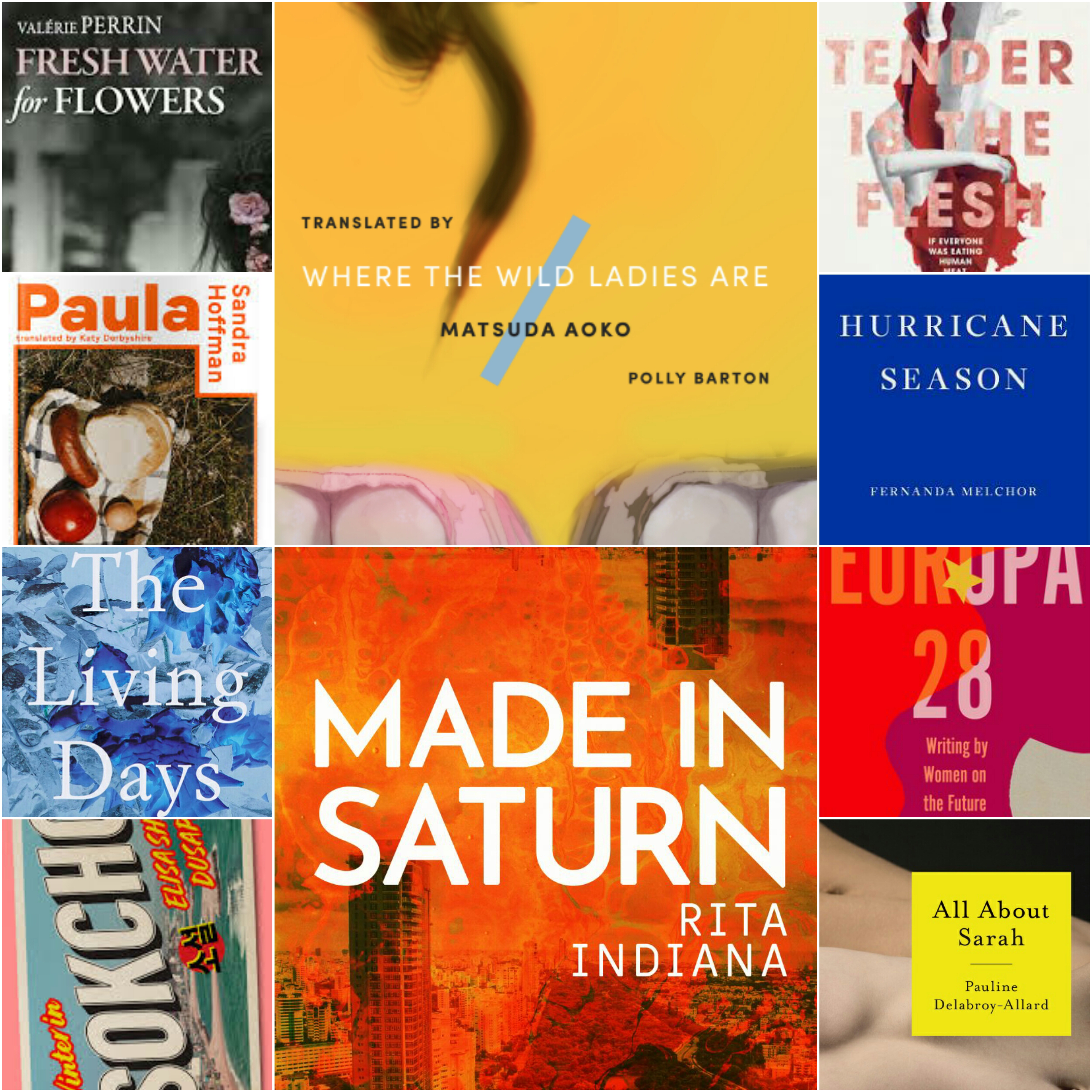 I have a renewed gift subscription to Tilted Axis Press this year, and so I was excited to see that 2020 looks set to be a bumper year for the press, with five of their six titles (their biggest annual catalogue to date) being by women in translation. I can’t wait for the first release, Matsuda Aoka’s Where the Wild Ladies Are, “a contemporary feminist retelling of traditional ghost stories by one of Japan’s most exciting writers” translated by Polly Barton, and am also impatient for the new Yan Ge novel, Strange Beasts of China, translated by Jeremy Tiang (I loved The Chilli Bean Paste Clan, translated by Nicky Harman for Balestier Press and reviewed here), as well as the UK publication of Duanwad Pimwana’s Arid Dreams, translated from Thai by Mui Poopoksakul. You can read publisher Deborah Smith’s take on all of the 2020 Tilted Axis titles here.

And Other Stories continue to fly the flag for women in translation this year: first off, later this month we can look forward to Rita Indiana’s second novel, Made in Saturn, translated by Sydney Hutchinson. I’m champing at the bit for this; Indiana’s first novel Tentacle, translated by Achy Obejas, was my surprise hit of 2018, and Made in Saturn is described as “a hangover from a riotous funeral, a rapid-fire elegy for the revolutionary spirit, and a glimpse of hope for all who feel eclipsed by those who came before them” – it promises to be as electrifying as Tentacle. Later in the year we can expect the next Lina Wolff, Many People Die Like You, a “wicked, discomfiting, delightful and wry” collection of short stories (translated again by Saskia Vogel, who did a magnificent job with Wolff’s The Polyglot Lovers last year), and a new-to-me Salvadoran writer, Claudia Hernández, whose novel Slash and Burn, “a suspenseful, slow-burning revelation of rural life in the aftermath of political trauma,” is in the very capable hands of Julia Sanches.

Fans of Margarita García Robayo and Selva Almada are in for a treat, as Charco Press are bringing us their next novels! There probably isn’t a corner of the internet where I haven’t professed my love for García Robayo’s Fish Soup (2018); the follow-up is Holiday Heart, a novel about a disintegrating marriage, translated again by the very talented Charlotte Coombe. As for Selva Almada, The Wind That Lays Waste (tr. Chris Andrews) was an excellent debut (and won best first book of the Edinburgh International Book Fair 2019); Almada’s second offering Dead Girls is a journalistic novel about femicide, and the cherry on the cake is that it will be translated by Annie McDermott, whose previous work for Charco is top-notch. Charco will also be publishing the debut novel of Chilean author Andrea Jeftanovic, Theatre of War (tr. Frances Riddle), which marks Jeftanovic’s first appearance in English and Charco’s continued championing of women authors from across Latin America.

In March, Comma Press will be releasing a landmark collection in collaboration with Wom@rts and Hay Festival: Europa28 brings together 28 acclaimed women writers, artists, scientists and entrepreneurs writing about the future of Europe in a “powerful and timely anthology [that] looks at an ever-changing Europe from a variety of different perspectives and offers hope and insight into how we might begin to rebuild.” Sophie Hughes edits with Comma’s Sarah Cleave, and Europa28 features a stellar cast of writers and translators.

And speaking of Sophie Hughes, her translation of Fernanda Melchor’s Hurricane Season for Fitzcarraldo Editions will be released imminently! Hurricane Season is “a formidable portrait of Mexico and its demons” that, I believe, opens with the line “The Witch is dead.” Hurricane Season is one of my most anticipated books of 2020 – this time last year I mistakenly thought it was coming out in 2019, so I’ve been looking forward to it for a looooong time and I CAN’T WAIT. (*update*: I just received my copy, and the first line is not “The Witch is dead”, but it’s even better – if a book can be judged on its first page alone then I can say right now that this is AMAZING). Then in April Fitzcarraldo will be bringing us the next Annie Ernaux, A Girl’s Place (translated by Alison L. Strayer, who also translated The Years) – and will be releasing it on my birthday, no less! Champagne all round.

Elsewhere, we can look forward to the next Samanta Schweblin from Oneworld: Little Eyes, translated by Megan McDowell, is “a chilling portrait of our compulsively interconnected society”, and looks set to be as spine-tingling as Schweblin’s previous work. Earthlings, Sayaka Murata’s second book, is coming in October from Granta Books: Earthlings continues with the theme of outsiders, presenting characters who believe they are not human, and is translated by Ginny Tapley Takemori, who did an excellent job on Murata’s best-selling Convenience Store Woman in 2018. Les Fugitives have kicked off the year with a new novel by award-winning Mauritian author Ananda Devi, The Living Days (translated by Jeffrey Zuckerman), in which white supremacy, desperation and class conflict collide on the streets of London. My 2020 pick from Pushkin Press is Tender is the Flesh by Argentinian author Agustina Bazterrica: translated by Sarah Moses, this chilling-sounding dystopian novel is set in an alternative reality in which it is legal to eat human meat. Sounds horrifying, but I do love dystopian fiction so I’m going to steel myself and dive in…

In less gruesome news, here are three very different French-language books to look out for in translation this year:

Europa Editions UK will be bringing us Valérie Perrin’s Fresh Water for Flowers, translated by Hildegarde Serle: the daily life of a cemetery caretaker is disrupted by a clandestine tribute in the “funny, moving, intimately told story of a woman who believes obstinately in happiness,” while Elisa Shua Dusapin’s Winter in Sokcho, which I enjoyed reading in French last year, is coming from Daunt Books in a translation by Aneesa Abbas Higgins: in this closed-down tourist town on the border between North and South Korea, a young French Korean woman works as a receptionist in a dilapidated guesthouse, and is drawn into a tacit relationship with an unexpected and mysterious guest. Finally, Harvill Secker are offering a new international series of eight books in 2020, kicking it off with All About Sarah, the debut novel by Pauline Delabroy-Allard (translated by Adriana Hunter): this was a literary sensation in France last year, and is described as “an intoxicating and evocative novel about the all-consuming love affair between two women and the ruin it leaves in its wake.”

Fans of German literature will be pleased to know that V&Q Books recently founded an English-language imprint, headed by women in translation champion Katy Derbyshire, and we can expect their first three releases in September. Two of the three are by women: Lucy Fricke’s Daughters (translated by Sinead Crowe) tells the story of “two women, pushing forty, on a road trip across Europe, each of them dealing with difficult fathers along the way”; Sandra Hoffmann’s Paula (translated by Derbyshire herself) is an autofictional account of “the writer’s relationship to her grandmother, a devout Swabian Catholic who refused to reveal who fathered her child in 1946.”

So that’s 20 books for 2020, with doubtless many more exciting releases to come in the course of the year. I’m already wondering whether any of these will make it onto my end-of-year top books of 2020 – in the meantime, happy reading!