I always make new year’s resolutions. Not in a “go to the gym, learn a new skill, tick something off the bucket list” kind of way, but small, attainable goals that I can stick to. This time last year, my resolution was to read more: I always used to have a book on the go, but the combination of having less free time and more access to instant short reads meant that I reached the end of 2017 feeling I had got out of the habit of reading. So in January last year, my husband bought me a copy of The Vegetarian and a subscription to Tilted Axis Press; if you’ve read around this site, you’ll know that’s how the Translating Women project began.

My reading in 2018 was directed in several different ways: browsing the catalogues of  publishing houses I’d identified as relevant to the project, recommendations on Twitter, books sent to me for review, impulsive trips to bookstores, and gifts from people who knew about the project. Because there was no particular order to my reading, I compiled a geomap to see where I’d been reading from (the darker the shade of red, the greater the quantity of books I read from that country): 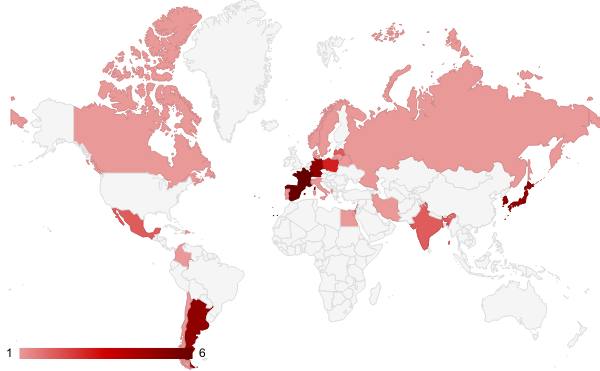 So this is how my reading – and my new year’s resolution – panned out in 2018. This map represents the 59 books I read by women in translation last year, and the geographical coverage is reasonably broad: though it’s easy to see that I read one text each from Russia and Canada because of the scale of the territory, it’s also worth pointing out that there are other comparatively small geographical areas such as the Dominican Republic, Iran, Albania and Lebanon which also make their way on there with one book each. Scandinavia was quite well represented, with Norway, Sweden and Denmark all making an appearance, and Eastern Europe didn’t fare too badly either. The gaping hole is, perhaps unsurprisingly, over Africa: apart from one book from Egypt, there was nothing in my year’s reading from Africa. There are many cultural and linguistic reasons which could account for this, but since part of my interest lies in translator studies (the focus on the translator as agent), I wonder whether what is available in translation might be determined in part by the number of translators working out of a given language? Perhaps the source languages that made up my 2018 women in translation reading might offer an indication of what is most readily available: 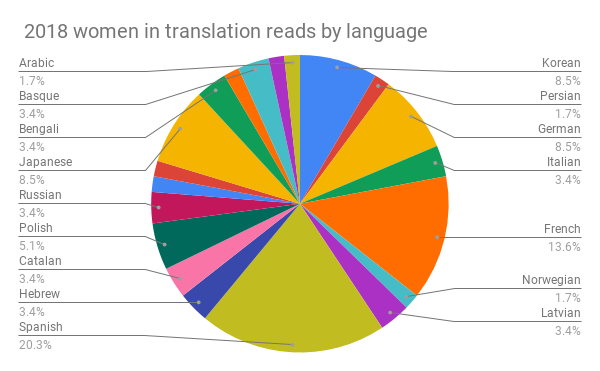 You can see from this pie chart that the dominant language in my women in translation reading last year was Spanish (20.3% of my reading, or 12 of 59 books), though it is interesting to note that all but two of these came from Latin America. This is in part down to Charco Press, who focus on publishing English translations of works from that particular geographical area (I read four from Charco, but also four from And Other Stories – all published as part of the Year of Publishing Women – and two from Oneworld). Of the six books I read from peninsular Spain, two were originally written in Spanish, two in Basque and two in Catalan – an even distribution that does not reflect proportionally what is published in Spain itself (for further breakdown: both Spanish language books were published by Harvill Secker, both Basque books by Parthian Press, and one Catalan book each from And Other Stories and Peirene Press – if I’m to draw a rudimentary conclusion from this, it would be the suggestion that the small independent publishing houses are championing what have been defined elsewhere as “smaller literatures”). French came second with 13.6% (six books from Metropolitan France, and one each from Canada and Lebanon, published by a range of publishers but boosted by Les Fugitives, who only publish translations of women writers from French), and then German, Japanese and Korean tied for third place with 8.5% (representing five books). Three of the five German books in translation were published by Portobello Books, as were three of the five Japanese books in translation (with another published by Portobello’s parent Granta Books), and the five translations from Korean were accounted for primarily by the efforts of Deborah Smith (translating Han Kang for Portobello Books and publishing Hwang Jungeun and Han Yujoo in the publishing house she founded in 2015, Tilted Axis Press). For me, the most interesting detail that comes out of analysing this pie chart is the influence that one person or small publishing house can have on the representation of a language, country or region (and this may go some way to explaining the lack of books from Africa, but I need to think about that more closely). As for the publishing houses themselves, here’s how my 2018 reads were distributed: 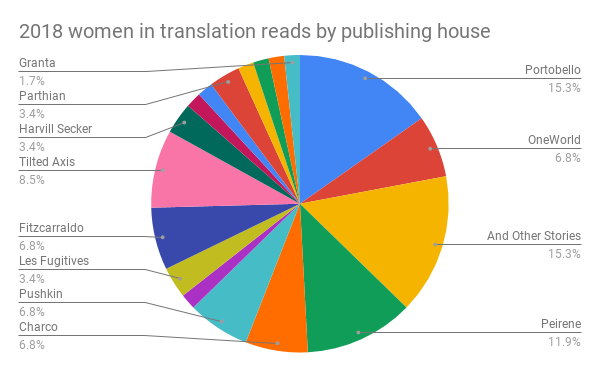 And Other Stories and Portobello Books dominated, closely followed by Pereine Press and Tilted Axis Press, with good representation from Charco Press, Fitzcarraldo Editions, Oneworld Books and Pushkin Press. If I ever develop my technological skills, I’ll combine the language chart with the publishing house chart, and see where the overlaps are…

2019: the year after the Year of Publishing Women

2019 is set to be a fascinating year for women in translation: Kamila Shamsie suggested that, more than the Year of  Publishing Women itself, “the real question is what will happen in 2019?”, and one thing I’ll be working on this year is the legacy of the Year of Publishing Women. In more general reading terms, the difference with my literary resolution for 2019 is that this year I know more or less what I want to read: this year I am reading with more of an awareness of where the gaps are (in my own reading and in what’s available to me), as well as an increased knowledge of recent trends within the publishing industry. Whereas last year it was exciting to dive in and discover new releases and back catalogues, this year my excitement is coming from the knowledge of some of the things I can expect. There are a few books that were originally scheduled for release in 2018, but publication was pushed back until early 2019: Palestinian author Nayrouz Qarmout’s short story collection The Sea Cloak, translated by Perween Richards for Comma Press, will be published in February, and the Tilted Axis Translating Feminisms chapbooks, originally scheduled for release at the end of 2018, are now due early in 2019. So I’ve carried those books over from my 2018 plans to my 2019 list. Fitzcarraldo are publishing two women in translation in their Spring collection and at least one more later in the year; in the course of the year And Other Stories are publishing three women in translation, Charco are publishing four, Comma Press two (as well as Qarmout, look out for Sudanese author Rania Mamoun, translated by Elisabeth Jaquette – this will make an interesting case study after my comments about Africa), Les Fugitives six, OneWorld four, Parthian two, Peirene three, and Tilted Axis three (plus the chapbooks). That’s at least thirty new women in translation titles coming from UK independent publishing houses, and these are just the ones I know about.

So that’s my year’s reading pretty much planned out, with room for a few new discoveries or surprises, and keeping some space for books that aren’t women in translation (yes, I do occasionally read such things!) And while awaiting the first wave of new releases, I’m blasting into 2019 with these three that I just received from Foyles: 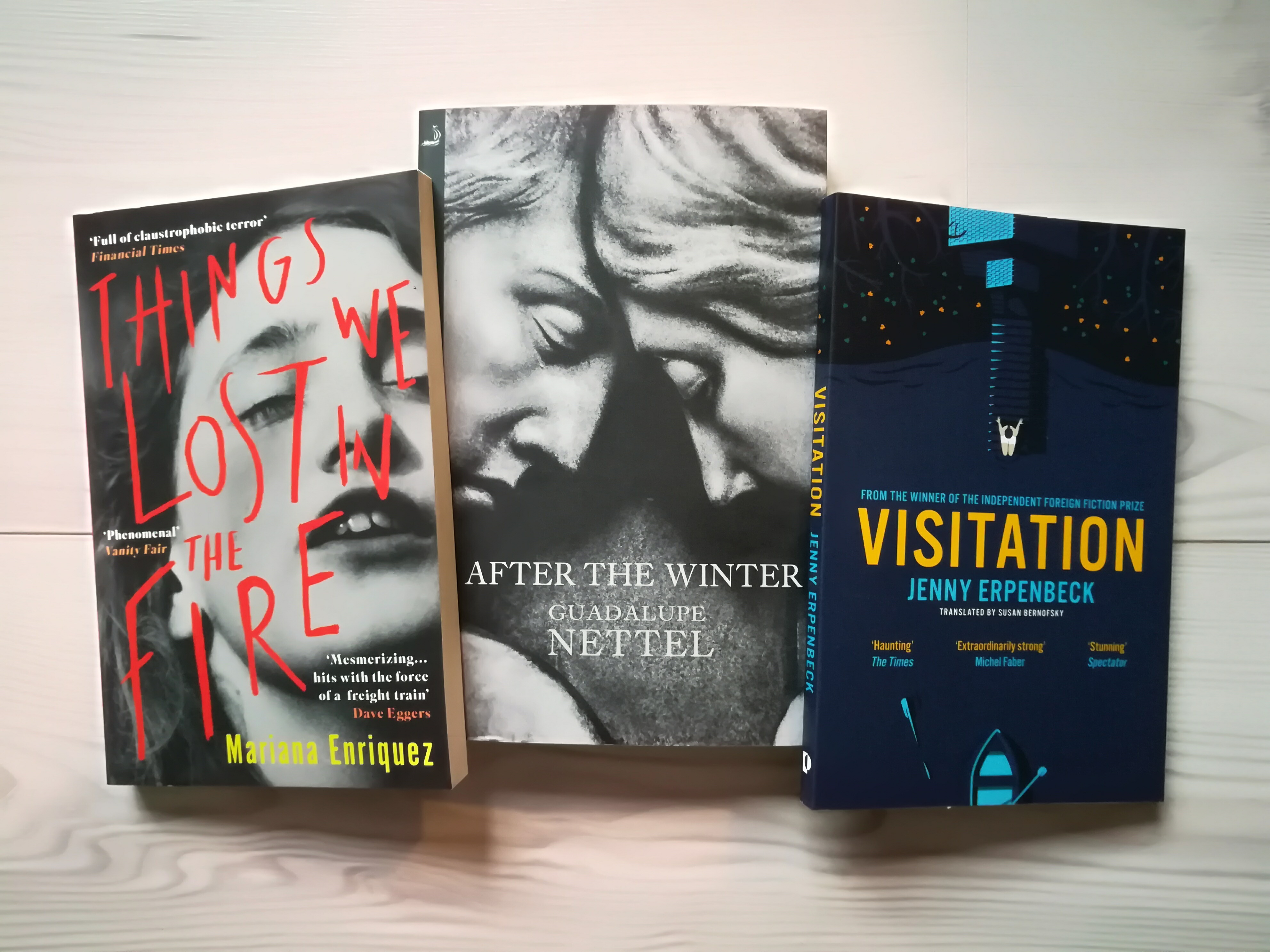 There are two from Granta’s now-shuttered imprint, Portobello Books: Mariana Enriquez’s short story collection Things We Lost in the Fire, translated by Megan McDowell, is simultaneously exciting and terrifying me, and I don’t think I can go far wrong with Visitation, another Jenny Erpenbeck novel with Susan Bernofsky translating. I also ordered After the Winter by Mexican author Guadelupe Nettel, translated by Rosalind Harvey: though Maclehose is too big a publisher to be featured in the main corpus of this project, sometimes there’s a book I just want to read anyway.

As I renew my commitment to reading women writers in translation, I’m going to end on this quotation from one of my favourite books of 2018, Olga Tokarczuk’s Drive Your Plow Over the Bones of the Dead. In a magnificent translation by Antonia Lloyd-Jones for Fitzcarraldo Editions, the narrator muses: “How wonderful – to translate from one language to another, and by so doing to bring people closer to one another – what a beautiful idea.” Happy New Year to all blog subscribers and visitors, and thank you for your support through another year of reading women in translation.